At the start of 2020, I ditched the tradition of listing resolutions and instead jotted down a few intentions. I, of course, included a couple that focus on nutrition and self-care.

If you’ve stumbled upon my previous posts, you probably know I have celiac, I’m vegetarian, and reluctantly need to follow a gluten-free diet while missing the pastas and crusty breads of my childhood. Well, I’ve decided to take this one step further and eliminate flour from my diet completely for at least 99% of the time. I am human after all and the occasional gluten-free cupcake won’t kill me!

I started 30 days ago – just before the holidays, because why make things easy? So, here is one of the dishes I made for the first time. These personal-sized pizzas remind me of the bagel pizzas I made as a teenager for a late-night snack. They’re a little lighter and a little more grown-up with a selection of cheeses I would have never chosen over my beloved mozzarella back in the day.

I hope you enjoy!

First up: The portobello mushroom caps. I tried to find large ones, but the baby ones can be used for small bites. I like to peel mine before eating just because I think they’re cleaner. Remove the stems which can be added to your marinara or used as a topping when building the pizzas. I brushed the caps liberally with extra virgin olive oil on both sides for browning and a flavor boost.

Next: The big three. These are my favorite cheeses at the moment. Fontina is my go-to whenever I want a gooey-melty cheese in a recipe. I’ve used it in lasagna, baked mac-n-cheese, quiche, and now pizza. I just love the texture and the flavor; it’s pretty much replaced mozzarella for me which I find bland next to fontina. I also used two types of Havarti: aged and creamy. The aged is a hard cheese that could substitute Romano or parmesan and the creamy is a softer cheese with a buttery flavor. 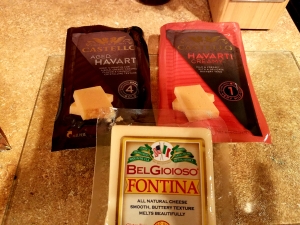 The toppings: The cheese is thinly sliced and accompanied by one of my favorite pizza toppings – sundried tomatoes.

Building: A generous amount of homemade marinara sauce covers the caps with the sundried tomatoes on top. I wanted the tomatoes underneath all that cheesy goodness!

And then: Layer the cheeses. YUM!

All dressed up: A little fresh parsley is a nice touch. 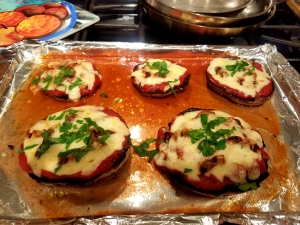